The Birth of Jesus: A Baby Changes Everything

The amazing and talented Joe Castillo tells the story of the birth of Jesus in this SandStory. Choreographed to Faith Hill’s hit song “A Baby Changes Everything,” many will feel strong emotion while watching this video.

The Birth of Jesus told by Joe Castillo

Sand Story by Joe Castillo: A Baby Changes Everything

The combination of the works of two very talented people, Faith Hill and Joe Castillo, make for a true masterpiece, both visually and audibly on the birth of Jesus. For those that are unfamiliar with Joe Castillo and what he does, you have been missing out. Joe Castillo is the world’s leading Sand Artist. He tells stories with his hands in the sand, using a light table and music as a medium. His art involves spreading sand on a light box and then shaping and reshaping it into ever changing images that tell visually powerful stories. Watching the story unfold before your eyes are astounding. Seeing his arm move around on the screen reminds the viewers that a human being is behind this engaging form of art.

Joe was born and raised in Mexico City. He moved to Florida in his teens, attended Ringling School of Art, and earned a degree from Florida Bible College. For the next 20 years of his life, he worked in advertising, running his own very successful business. He then decided to go back to school, and he earned a M.A. in Biblical Studies and M. Div. from Asbury Theological Seminary. He pastored a church for five years, but is now a full-time performer, using his God-given talents to inspire people.

His performances will stimulate all your emotions. You will laugh, cry, hurt and heal. You will be inspired and motivated to do better. Through his art, Joe has a way of touching the souls of so many people.

Joe Castillo has performed at events for some of the largest corporations in the world, including Apple Computers, Disney Marketing Group, and Mercedes Benz. He has a passion for promoting corporate messages using his talents. No crowd size intimidates him. He easily entertained 35,000+ people at Lucas Oil Stadium. But he also loves the more personal, intimate setting of a small crowd. He has performed for dignitaries and royal families around the world. He has been on all the major network television stations and has had a documentary made. Joe has received many awards for his work and was a finalist on NBC’s America’s Got Talent. Joe speaks Spanish and English fluently.

For additional information on booking Joe Castillo and SandStory to tell the  Christmas story of the birth of Jesus, contact Tim Grable at 615 283 0039.

END_OF_DOCUMENT_TOKEN_TO_BE_REPLACED

Office employees highly anticipate Christmas parties. Few can say no to the occasion to unsaddle from their working routine, leave their troubles behind, and have a great time.  With the holidays around the corner, it's high time you start making preparations to make...

END_OF_DOCUMENT_TOKEN_TO_BE_REPLACED 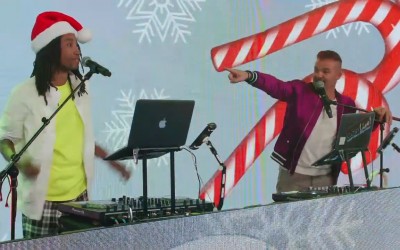 Going Virtual this Year? How to Host a Virtual Holiday Party

Wondering how to celebrate your staff this holiday season? A virtual office holiday party is the best way to celebrate your team, even if everyone is located in different locations or cannot gather to gather. Going virtual this year means just about anything that can...