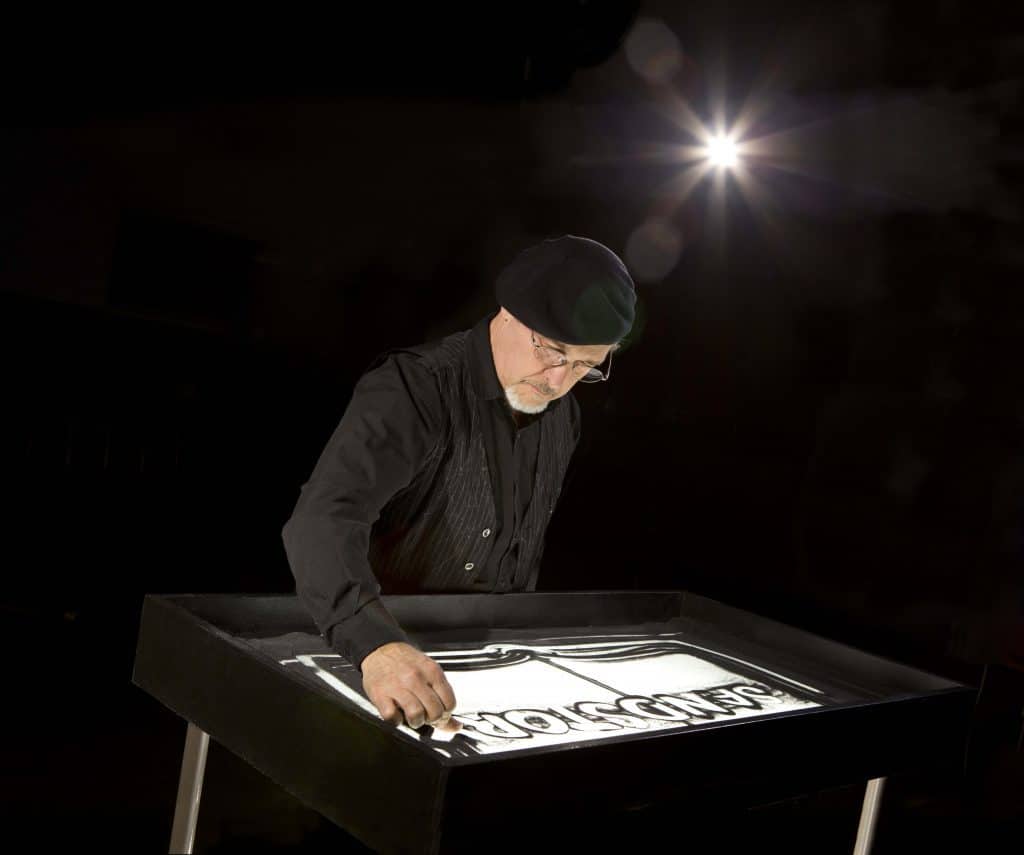 America’s Got Talent introduced the world to the sand art of Joe Castillo, a unique performance artist who works in sand on a light table. With his bare hands, he shapes sand and negative space into a backlit display of imagery. However, he does not only draw an art piece in the sand while you watch and leave it at that. Instead, he draws something and then seemingly magically; he changes it into something else entirely and then does it again.

The series of transformations often has a theme and can sometimes tell a story without words. Each performance is accompanied by music chosen to enhance the visual part of his work. If you have not seen this kind of performance art before, it is hard to convey how captivating and moving it can be. So, here are five videos of some of his public performances. Watch them and experience his live performance art for yourself.

Joe Castillo’s Amazing Sand Art Captivates America’s Got Talent
In his first appearance on AGT, he is asked “What is your name?” and “What do you do?” He answers “My name is Joe Castillo.” and “I use light and sand, and I tell stories.” His first story told in this unusual medium blows away both judges and audience alike.

The Sandman Cometh for Howard Stern

At its core, art is about communicating something in new and compelling ways. The artist uses creative vision, and unique media to convey his message to the audience. Sand, light, and music are the media Joe Castillo uses to tell his stories. His unusual talent has enabled him to perform in over eighteen countries, allowed him to appear in the 2011 TEDActive! Conference, and taken him all the way to the finals of the reality show competition America’s Got Talent in September 2012.

The Sandman Cometh for Howard Stern by Joe Castillo

This is a short piece that takes the audience through a series of emotional ups and downs. It ultimately ends on a happy note.

Animals in Sand Art on America’s Got Talent

This performance is astonishing for its ability to transform one animal figure to another smoothly. Each animal image emerges from the previous image as if by magic. It is mesmerizing to watch the transformation of one thing turn into another.

Castillo is adept at using his sand artistry to communicate cultural, civic, religious, or corporate messages. He also entertains. He performs his SandStory, ArtStory, and WordStory presentations in both English and Spanish. During a live performance, he captivates audiences with both the novelty of his medium and his fast-paced and innovative creations.

This video highlights Castillo’s skill as he uses sand to create a fully recognizable caricature of Howard Stern. It seems almost magical to watch as he transforms the pile of sand into an image of Stern’s face. The background music as Castillo spreads and smooths adds to the anticipation and wonder as the portrait appears. Castillo’s trademark beret perched on Stern’s head provides the final touch to the picture.

Art reaches humans on an emotional level and using visual arts to educate, entertain, or persuade nothing new. Doing so in a unique and memorable manner is the key. Indeed a medium as uncommon as sand and light communicates a message in a way that ensures it will be remembered. Utilizing that great medium with as much skill and creativity as Joe Castillo means the viewer will not only enjoy the performance but will be inspired by the message.

Joe Castillo’s performance of  Sand Art uses the dynamic interplay of light and sand in motion to weave visual stories before mesmerized audiences of NBC’s America’s Got Talent 2012. Deftly moving through preliminary and advanced rounds of competition, Castillo, a native of Mexico City, family man, and international artist, has been a favorite with show judges Howard Stern, Sharon Osbourne and Howie Mandel.

This performance art piece is particularly uplifting. Its themes allude to symbolism. Art and music are two of the ways to achieve the sublime. Here, they are both combined to great effect.  Castillo narrates a sandy slideshow revolving around the themes of love and solidarity to the music of the The Youngbloods’ “Get Together.” His performance as featured above has earned him a spot among the Finalists for Season 7 of the British-born global entertainment sensation.

Joe Castillo and PS 22: The Edge of Glory  “Sand Art America’s Got Talent”

Joe Castillo and PS 22: The Edge of Glory

In this performance art piece by Joe Castillo, the musical portion gets more emphasis. The usual canned music is replaced. Instead of a recording, the musical accompaniment is provided live by a children’s group. They surround him on stage and, while he works; they sing “The Edge of Glory.”

As you can see, Joe’s live sand art performances on America’s Got Talent was inspirational. The audiences were enthralled, and the judges have been blown away. The combination of inspirational music and evolving imagery has a surprisingly strong emotional impact. This is particularly the case when a particular piece touches a chord like patriotism or peace and unity.