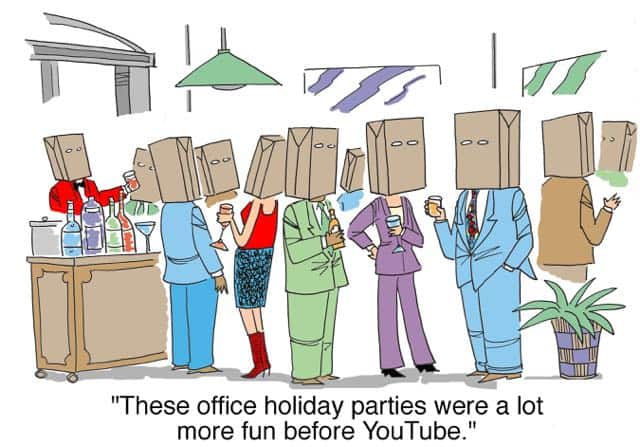 Laughter is the best gift you can give this holiday season.  The traditions of Christmas find many people enjoying time with family and friends, exchanging gifts, feasting on festive foods, and sharing laughter about Christmases past. So why not add to the joy of the season with a bit of funny Christmas entertainment?

Whether you are planning a corporate Christmas party, hosting a holiday fundraiser, or just gathering all of the employees together to celebrate, adding some funny Holiday entertainment to the mix will have everyone in good spirits.

We all have individual memories of that one holiday we will never forget. Maybe it is when Cousin Jay ate so much raw cinnamon roll dough that it came out his nose, or the year Grandma dropped the turkey on the kitchen floor but served it anyway. Alternatively, maybe it was the time your boss put on that one crazy Christmas party everyone still talks about. The funny Christmas entertainment options below will ensure that this Holiday Season is one everyone will remember forever. Each entertainer can have any audience leaving jollier than when they arrived. 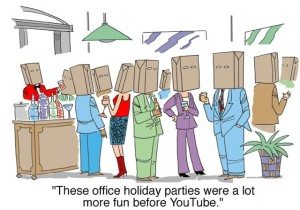 Choosing entertainment for your work party is easy if you know what to look for. These entertainers take the cake as a theme for fun office holiday party ideas that will impress everyone and make for a delightful evening all the way around. Bringing in musical talent makes any office party enjoyable, especially when the performer has a blend of skills. Comedians are always a sure-fire hit because they take the ordinary, everyday problems of real life and shed a humorous light on them. It is easy to relate to stories of relationships, parenting, technology, growing up and just about any other theme you can think of. They draw from their experiences in a way that connects with audiences and makes them chuckle. Bring the side-splitting laughter and the joy of music to your next co-worker get-together by picking from fun office holiday party ideas that include stand-up comics and musicians that entertain.

Ross Bennett brings in an expressive way of getting the laughs. Growing up in the 1970s and once headed for the military, the natural joker changed paths and started performing at nightclubs instead. His candid look at topics includes New York exposure as a small-town guy, facing down little old ladies, trying to park, water skiing and more.

Keith Alberstadt is a self-proclaimed smart-aleck, and his quick wit is always right on the money. He says it like it is, getting to the heart of matters with sarcasm and fast punchlines that keep audiences roaring. With a history as a contributing writer for Saturday Night Live’s Weekend Update, he touches on every topic imaginable in a charming way.

An accomplished ventriloquist and pianist, Taylor Mason keeps viewers enthralled with his unique blend of bursts of humor backed by skillful music talent. He was the grand prize winner of “Star Search” in 1990 and has become a favorite for fun office holiday party ideas.

As a well-known performer in the corporate arena, Bob Stromberg draws from his personal experiences as he captivates audiences everywhere with his witty jokes and musical ability. He talks about everything from adolescence to nights at summer camp, delivering enjoyable entertainment and punchlines that keep you smiling.

Daren Streblow has opened for Weird Al Yankovic, Brad Stine, and others, performing a comedy routine with a style that’s on the nerdy side, coining him as “The King of Uncool.” With his offbeat humor, delivered in a subtlety that takes you by surprise, he is a hit for office parties or any other event.

Jeff Allen’s ability to explain a situation, taking it from an ordinary life experience to one that makes you laugh out loud in spite of yourself, is unparalleled. Using facial expression and timing as his tools, Jeff Allen takes you into his life and has you looking for parallels to yours before you know it, laughing all the while.

Joby Saad, known as the village idiot, is an interesting entertainer. He brings uniqueness to the stage, and before they know it; audiences are laughing harder than they expected to. He sneaks up on you, showing you the world through his eyes. What he sees is funny, and you’ll think so too.

The Difference Between Church And Night Clubs. Steve Geyer

Steve Geyer’s natural ability to deliver a joke without it seeming like one sets him apart for other comics. You feel his pain and his triumph, relating to him on the same levels that you might a friend. After 20 years as a comedian, Steve Geyer knows his way around a joke.

Bob Nelson makes you laugh at yourself – really hard. He brings stereotypes to the forefront, parodying them and putting them on display. His ability to embody a character is uncanny. Bob Nelson is a clean comic choosing wit over vulgarity. His ability to bring life to his characters is something to see.

Juggling and comedy… did you see that coming? It may sound like an odd combination, but Jeff Civillico pulls it off and does so with style. Headlining the show Comedy in Action at The Quad Resort Casino in Las Vegas, Jeff Civillico combines juggling bowling balls and knives with situational comedy that keeps you on your toes.

Adam Trent brings his skills to the stage in the form of an incredible illusion and magic act. Starting at a very young age, he has been perfecting his craft throughout his life. His skill and time are definitely evident in his act, but he takes his talent to a whole new level with the use of technology. He uses traditional magic tricks mixed with modern technology, illusions, dance and delivers an unforgettable experience to all who attend.

For fun office holiday party ideas, consider bringing in an accomplished musician to keep the event going strong, or a comedian that knows how to actually connect with their audience and keep them laughing steadily. You want your event to be a success, and these entertainers can help you make that a reality.

Comedians who have Funny Christmas entertainment

One of the very few comedians to be featured on the cover of the Wall Street Journal, Robert G. Lee has a long list of experiences that contribute to his success in the comedy world. He is a well-known personality having done pre-taping warm-up routines for several successful sitcoms. Incorporating stories of Christmases past along with photo evidence of his unbelievably funny memories, he will leave any audience with laughter reminiscing about their funny holiday stories.

Bob Stromberg is a Minnesota-based comedian offers a unique blend of comedy types including audience participation, physical comedy, and traditional stand-up comedy. He has performed at countless corporate events for Fortune 500 companies, appeared on television shows and stages around the world, and has authored several successful books and theatrical pieces. His incorporation of shadow puppet storytelling offers a unique experience for audiences.

Daren Streblow on Santas Secret Organization
Another Minnesota native, Daren Streblow utilizes observational comedy routines to induce roaring laughter with audiences. More than a comedian, Streblow hosts The Daren Streblow Comedy Show.  This Clean Comedy syndicated radio show can be heard on more than 90 stations across the country. Once labeled the “King of Uncool”, Streblow’s routines offer a simple take on the world around him. Streblow has also appeared in several films and television shows.
"Weddings" - Jim Gaffigan (Obsessed)

Jim Gaffigan has been entertaining audiences for 25 years. His comedy pieces are often focused on food-related topics, typically humorously discussing his struggle to avoid junk food. During his routines, Gaffigan speaks in different voices, sometimes imitating the characters in his stories, but more often speaking as his conscience or subconscious mind. His ability to say out loud what we are all silently thinking leaves audiences laughing out loud. Gaffigan can be seen on his show, The Jim Gaffigan Show, which airs on TVLand.


Do You Hear What I Hear?

Hailing from Missouri, Tim Hawkins shares the comical stories of his daily life with his wife and children, sometimes including stories from his childhood. Hawkins’ comedy stylings have been described as one part gifted and two parts twisted but in a good way. His views of the world around him and his experiences as a father will not only have audiences rolling in the aisles but also teaches them how to find humor in their lives.

As a member of the Blue Collar Comedy Tour, Jeff Foxworthy is best known for his signature “You might be a redneck” jokes. His “Redneck 12 Days of Christmas” has become a classic since it was released in 1996 and plays every Christmas season on country music stations nationwide. Foxworthy’s hilarious look at life from a country perspective offers a unique experience. He proves that you do not have to be a “redneck” to laugh at his funny Christmas entertainment.

This comedy duo consisting of Bradley Bean and Jackson Bailey first met at college in 1992. With a small group of friends, the two spent their free time making comedy videos and stand-up routines. After leaving college, they went their separate ways until 1999 when they met again and began creating new content. Their shows include topics that resonate with the “everyday man” such as Wal-Mart, donuts, marriage, and dating. They often sing songs were parodying these topics. These songs often begin with a serious tone, but quickly take a turn for the humorous.