Showing off his unique comedy and magnetic combination of athletics, showmanship, and clean comedy, Las Vegas entertainer Jeff Civillico juggles for an audience. Jeff dubs this blend Comedy in Action and displays it effortlessly. A striking and theatrical presence,  he makes the simple look complex and the complex look simple as he demonstrates his art.

Possessing a friendly, clean and straightforward brand of humor, Jeff openly invites his audience to laugh at the silliness of his act. Not afraid to invite the audience into the show, Jeff interacts with his viewers and adjusts his act on the fly. Note how Jeff feels out the room’s audience as he gives them “the Vegas stuff” before returning to a less-showy, more artful note. As his act reaches its climax, Jeff directly interacts with a member of the audience, allowing them, and the entire room to feel like more than just mere onlookers.

Watch Jeff Civillico balance a 10-foot ladder on his chin in this excerpt from his professional stage show. Jeff is a versatile entertainer, combining comedy, juggling, audience interaction and much more into a high-quality, action-packed spectacle he calls comedy in action, it’s a blast for all audiences.

Based in Las Vegas, where he headlines his dinner show at the famed Caesars Palace in Las Vegas, Nevada, Jeff Civillico has brought his unique stunts and magnetic personality to countless stages around the country. Now he’s ready to liven up your event with a signature brand of high-energy, clean, exciting entertainment. 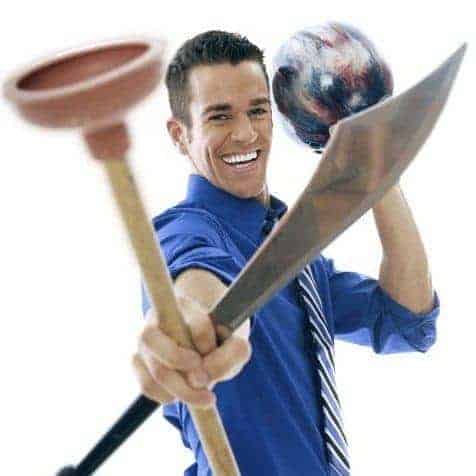 Book Jeff Civillico today as the perfect entertainer for conferences, conventions, fundraisers, festivals, or any event where top-notch entertainment is essential.

Hire the Comedy in Action of Jeff Civillico

Jeff is also a skilled and experienced MC for corporate meetings, and has developed highly effective team building workshops that can be tailored to the needs of your organization. Smooth, adaptable, charismatic, and engaging, Civillico might just be the missing piece that will take your next event from “good” to “amazing.”

Few people in this world receive standing ovations day after day for their juggling. Even fewer run marathons while juggling or ride unicycles off of cliffs. But such accomplishments are routine for Jeff Civillico.

Jeff Civillico: Corporate TeamBuilding
Jeff primarily works huge stages as a headline entertainer in Las Vegas, but he also entertains throughout the United States. And wherever he performs, he forms strong connections with his audiences. People just warm to him right away. Moreover, Jeff brings to each of his shows astounding physical prowess, sharp comic timing, a delightful personality, and loads of energy. His shows combine family-friendly jokes, juggling, physical stunts, and crowd interactions. As such, Jeff is correct to call his style of performance “Comedy in Action.”

A Georgetown University honors graduate; Jeff has a busy offstage life. In his free time, he enjoys “jogging”: simultaneous jogging and juggling. He presides over the Georgetown University Alumni Club of Las Vegas. He runs Win-Win Entertainment, a nonprofit he founded that supplies charities with talented performers free of charge. He belongs to the National Speakers Association of Las Vegas and the Young Nonprofit Professionals Network of Southern Nevada. Moreover, guess who was the first person to ride a unicycle off of “The Ledge,” a 1,300-foot-tall cliff in Queenstown, New Zealand. That is right: It was Jeff. That fact is good to know in case it ever comes up on “Jeopardy.”

When Jeff performs for corporate audiences, he discusses the techniques of learning to juggle, and he relates those processes to the ways in which business people acquire new skills. Further, he uses his various stunts to represent methods of strengthening creativity, stretching problem-solving abilities and finding solutions to workplace challenges.

Also, Jeff Civillico is available to emcee awards shows and other kinds of business and community presentations. And he is truly versatile in this role. If something goes wrong during an event — if someone fails to show up, say, or if a piece of equipment crashes to the ground — Jeff immediately has the audience laughing so hard that no one cares about the snag.

Watch carefully the four audience volunteers in this video. Wary at first, these guys are clearly enjoying themselves by the end — even after they’ve collapsed to the floor. The audience, meanwhile, is reveling in the display, laughing uncontrollably at the plight of the “big dude” and his compadres. That’s the Jeff Civillico way. That’s Comedy in Action.