See How Todd Oliver Friends will Amaze and Entertain You 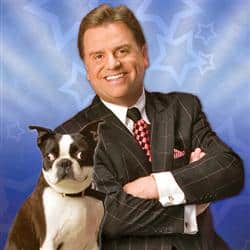 Ventriloquism is slowly becoming one of the largest forms of comedy in the United States. With people like Jeff Dunham created immense popularity for this comedic form, Todd Oliver takes it to a new level. Using a talking dog in his acts as “live dummies”, along with several of his actual dummies, Todd Oliver and his talking dog creates a unique comedy.

Todd Oliver and his talking dogs

Covering a vast array of topics, Todd Oliver’s comedy is family friendly, but has just enough edge to entertain the grittier comedy fans. With his signature friend Irving, who will constantly campaign to the crowd for their presidential votes, along with an eclectic cast of characters, Oliver is a satirical dream. His signature is obviously dog ventriloquism. Attaching a fake mouth to live dogs, Oliver creates a new kind of ventriloquism tool in a live dummy. Things like this make Todd Oliver an innovator in an already uncommon comedic practice.

Todd Oliver and his talking dog have appeared on numerous other television shows, including America’s Got Talent. Appearing also on late night shows hosted by David Letterman, Craig Ferguson, and Jay Leno, Oliver has established a name for himself in the comedy industry. What better way to create an atmosphere of joy and excitement for any event than to have some live comedy relief.

Companies like 3M, Sony, Nationwide Insurance, General Motors, and many others have employed Todd Oliver as their company entertainment for large corporate events. A man who has traveled the country entertaining the American people is a clear choice to create an unreal, unique atmosphere for an event.

Large theaters, enormous corporate shows, and a track record of live television success, Todd Oliver is a comedic revelation. Satirical, politically aware, and original in everything he brings to the table, this comedian is one that should be seen as a jack of all trades and an entertainer who cannot be passed up for large crowds.

Todd Oliver Friends delivers a hilariously original type of comedy entertainment to the crowd. He uses his fine-tuned ventriloquism skills and mixes them with the arts of acting and dog training. Many of his acts include his talking dogs. He brings these dogs on the set to answer questions and engage in “conversation” with him.

Ventriloquist Todd Oliver made it to the semifinalists on the television show “America’s Got Talent”. During his set on that show, he used a style that was seen back in the days of Johnny Carson. Show hosts such as Dave Letterman and Jay Leno still use this style of humor, which some might refer to as the “fan letter Q and A session.”  During the act, Todd asks one of his talking dogs a series of questions that pertain to politics, household problems, dog training and the like. The dog answers with something sarcastic and comical every time.

Todd Oliver Friends provides a great amount of high-octane comedy for crowds of all types. His humor is never dirty or offensive, and his jokes can always apply to just about anyone’s life. He is inspirational because he uses a talent that has become scarce over the past few decades. Ventriloquism is a difficult talent to master. By going on stage with his perfected ventriloquist act, Todd inspires people who are still working hard and trying to pursue careers in this field.

Has performed at some of the most popular venues in the United States. He has also received several awards for his outstanding situational comedy and the best-varied mix of talents. His group of talking characters consists of two dogs, named Irving and Lucy, Joey the bad boy, and Pops and Miss Lilly, who are older people with sass, class and various tips and pointers.

Todd Oliver’s formula for total entertainment has proven to be widely accepted and loved. Some of his biggest fans have described him and his act as “incredibly funny”, “hilarious”, and “amazing”. Several people have admitted to never before laughing so hard. Since laughter is the very best medicine that one can take, corporate meeting planners are urged to book one of his shows.

Todd Oliver Friends takes his crowds back to a time when people had unique pure talents, and other people watched them perform instead of turning on a reality show. Ventriloquism is severely underrated. It takes exceptional coordination skills, comedic tendencies, and advanced concentration to pull off.

Meet Todd Oliver and his case of hilarious accomplices. Shows can be booked for parties, church gatherings, weddings and more.  To book Todd call 615-283-0039.