If it were to carry a survey among event organizers, it is quite likely it will reveal a common struggle. It is the need to convey simple and easygoing entertainment which makes an audience react.

However, how to make sure you get this outcome? An idea would be to employ improv acts. Today, it is about The Panic Squad.

Despite what their name might suggest, there isn’t anything unnerving about this group. Quite the opposite.

Throughout this article, you will find out why.

All for Good Comedy

The Squad has everything but a dull story.

Currently counting nine members, the improv band started out in 1996 as a side project of Andrew Bright’s. At that time a student at Trinity State University, Andrew enrolled in the university’s improv league. Soon after, he turned his newly-found passion into a project alongside Dave Swan and other fellow improv comedians.

It took them five years to adopt Panic Squad as a permanent occupation. Moreover, then, it all went upwards with plenty of successful acts all across the United States and Canada.

What kind of audiences did they perform for?

From churches or conferences to Top 500 Fortune corporations, they have had everyone asking them back.

The nine comedic virtuosos who achieved this are:

Of course, not all get to perform during a gig. At an event, a team of  2 or 3 is assembled – depending on the location (US or Canada) and “Top Secret, Need to Know factors.”

They sure know how to create buzz around their work. Speaking of which, let’s have a look at what these guys are putting out there on the stage.

Improvisation acts are usually successful, as they quickly establish a connection between the performers and the audience.

So what is it that The Panic Squad has done right to position themselves at the top of the game? We give you two words: creativity and cleanliness. 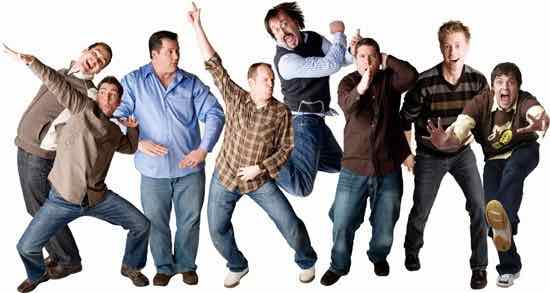 Just hearing them name their goal as “world domination through improvisation” makes you realize they were born to entertain.

However, how can an improv team steer away from potentially offensive content? It is quite simple actually – they are so versed in humor that there’s no need to resort to other kinds of jokes.

Plus, as they often mention, their artistic credo is linked to faith. A God-given talent can be displayed respectfully, Andrew claims.

After all, the Panic Squad’s forte is being able to adjust quickly. Since the content is created on the spot, they get to work with the exact material participants desire.

Once the rules are explained, people are asked to suggest ideas, words or quotes or even step onto the stage and move the actors around. Other entertainment weapons in the squad’s arsenal are:

Since any event could use some spontaneity, it is easy to understand The Panic Squad’s appeal. Their act has the potential to break the ice and enliven the most eclectic of viewerships.

If moving people and letting them get to have a real contribution is your goal, look no further. Prepare to enhance the message of your event in the most professional way with committed clean performers.