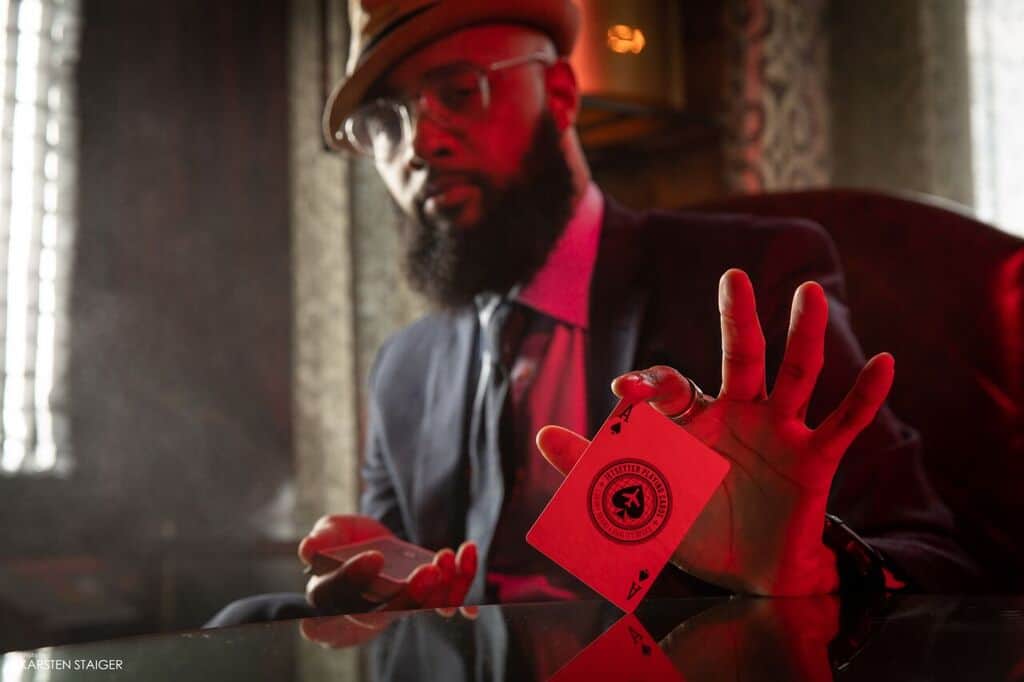 A good magic trick can make almost everyone laugh. However, we aren’t talking about pulling quarters from behind the ears; we’re talking about something greater.

Corporate magic is an entirely different story; it features more complex magic tricks and is riddled with moments of great stand-up comedy and soaring inspirational talks.

And for any event organizer out there, we have put together a list of 7 of the best magicians you can hire from the N.Y. magic scene.

Ryan Oakes is a mentalist from the N.Y. area and a regular performer at some of the most prestigious magic shows and venues from around town. With a career spanning more than 20 years, he has come to be one of the most in-demand performers in the country.

His unique brand of illusionism makes him a perfect choice for any corporate event. This is because Ryan combines his magic skills with his refined sense of humor, creating a well-rounded entertainment show.

Michael Chaut is one of the most respected performers in the industry. Due to his incredible skill and charisma, he is one of the best New York magicians you can hire for your event.

For over 25 years, he has been performing shows across the entire country. Throughout his career, he has had shows for many big Hollywood actors and Fortune 500 companies.

Noah Levine is a magician from the Brooklyn area with an impressive set of skills. He has showcased his mind-bending close-up magic across the country and has an unbroken track record of making entire audiences go “whoa!”.

Noah performs his show, Magic After Hours, weekly at Tannen’s Magic Shop, the oldest magic shop in New York. He also performs privately and has amassed quite an impressive corporate clientele.

Those who have seen his sleight-of-hand tricks testified that the experience was nothing short of brilliant.

Eric Jones’ name may ring a bell for many, as he’s a close-up magician who has reached celebrity status. Due to his appearances on Penn and Teller: Fool Us and America’s Got Talent, he has come to be one of the most well-known entertainers in the country.

It’s worth mentioning he has managed to fool Penn and Teller, both of them admitting they weren’t able to figure him out.

Eric’s magic comes from his sleight-of-hand techniques, and with his incredible digital dexterity, he can use any regular object to perform a set of dazzling tricks.

His shows are very engaging, fun, and perfectly tailored for a corporate audience – making him one of the best magicians you can hire for any event in NYC.

Jason Suran is a New York-based performer who has developed his style of psychological illusions. He has often been hailed as one of the best mentalists in the biz.

His acts of mindreading and illusionism are ideal for large-scale audiences, where he can grab everyone’s attention and then leave them scratching their heads in total amazement.

To give you a better idea about how good Jason is, one of his clients had this to say about him – “If I could do what Jason does, I could have ruled the world.”

Dan White is a magician based in New York who entertains audiences with his unique brand of close-up magic.

He started doing magic from a very young age, gradually turning it from a hobby into a profession.

His foray into the magic industry started with him working at a magic store and doing club shows on the side. A few years down the line and Dan would end up becoming the producer for big industry names such as David Blaine and David Copperfield.

Dan went on to create his magic show at the NoMad hotel, which would be met with overwhelming success – bringing Dan many accolades and earning him the nickname of “The Magician at The NoMad.”

Steve Cohen is a parlor magician, informally referred to as “the millionaires’ magician,” due to the exquisite nature of his magic shows.

He performs at private parties and is a regular performer at high profile venues, such as the Lotte New York Palace Hotel in Manhattan.

Steve’s brand of magic harkens back to the old-school, showing a preference for doing classic tricks that never fail to entertain.

The Best Magicians You Can Hire Are Right Here

We hope you appreciate the amazing entertainers we have featured in this article. Make sure your events are engaging by investing in high-quality entertainment.

If you’re organizing an upcoming event, then why not have a magician to entertain your guests? You can be sure that having one on stage is something truly unique, and your attendants will greatly appreciate it.

Our online portfolio contains some of the best magicians in the industry, and if you are interested in working with them, then give us a call at (615) 283-0039, and we will gladly assist you!